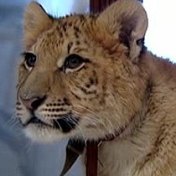 An animal trainer from Ekaterinburg (Russia) is now known for his extravaganza of raising a liger cub in his flat! The news made the internet.

A liger is a cross between a male lion (Phantera leo) and a female tiger (Panthera tigris). The female liger can produce fertile offspring. The lion and the tiger do not mate in the wild because the first lives in the African savanna and the later in SE Asia (endangered, only a few hundred individuals left). But as recorded, the two species can interbreed. This is in accordance with the biblical account of created kinds (the Hebrew word baramin). It means that from an original created type of cat (say, Protofelis) several genus of cat may have developed due to the genetic plasticity and natural selection: Phantera, Felis, Acinonyx, Smilodon, etc. The evolutionist view proposes an unknown imaginary ancestor form which all 40 actual cat species emerged since 11 mya.

Either way, todays cats are only degenerate mutants of the first cat couple, as can be seen below. :)))